Mutation testing is a type of testing designed to assess the quality of unit tests. This method is also sometimes described as “fault based testing” as it deliberately creates faults in software. 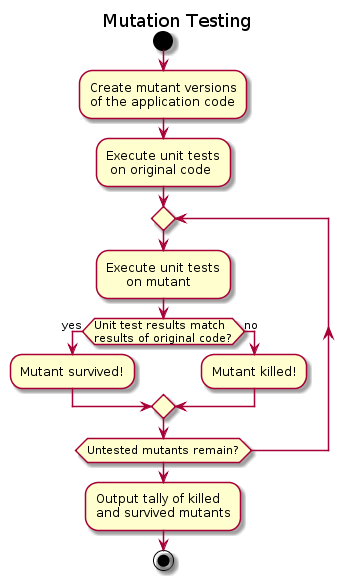 Here is an example where an if statement is modified to always equate to false. Despite this change the unit test results did not change. This indicates the unit testing is poor and not covering all logical cases.

Why use mutation testing?

For engineers, mutation testing is a great tool to support the development of unit test suites. In both Test Driven Development (TDD) and writing unit tests after development, mutation testing helps fill in gaps in test suites. Furthermore, difficult to kill mutations can often highlight problems with the code itself. This forces engineers to rethink their logic and refactor, ultimately leading to higher quality code.

Mutation testing can also be beneficial for managers or anybody involved in evaluating code quality and individual performance. In an ideal world, all code should be peer reviewed to a high standard, but it can be difficult to achieve and maintain within a team. Code quality is often crudely evaluated by the unit test suite coverage of a codebase. However, code coverage is a very poor indictor of the quality of the codebase and its test suite. Mutation testing can provide a metric, albeit not perfect, for the quality of unit testing that is verifiable without needing to look directly at the code itself.

See here for a good list of frameworks for many different languages.

The following is an example using Stryker, a mutation testing framework for the JavaScript ecosystem. The System under test (SUT) is a Node.js module containing a simple function that returns the longest word in a sentence.

The following test alone provides close to 100% code coverage but doesn’t actually verify that the function does what it is supposed to do. This test with no assertions is an extreme example and would no doubt be caught by code review, but just shows how easy it is to create poor unit tests.

Killing those 20 mutants required an additional four unit tests as shown below. Further unit tests could be written but for the purposes of this example only those required to kill the mutants are shown.

If you have a large codebase you will soon find that testing against hundreds or thousands of mutants takes a long time! Rather than hooking it directly in to your CI pipeline you might consider running the process once per night.

Sample code for this example can be found at https://github.com/peter-evans/mutation-testing